The Federal Reserve (“The Fed”) is the Central Bank of the United States. The Fed sets monetary policy (as opposed to Fiscal policy which is set by Congress) and sets these policies based on two central mandates: full employment and controlled inflation. As the chart below helps illustrate, the labor market is healthy with low unemployment of 3.6%1 and jobs are almost back to pre-pandemic levels.2 Inflation, which is a measurement of price growth, is currently significantly higher than the Fed’s long-term target of 2%. One popular measure of inflation is the Consumer Price Index (CPI); the latest reading for CPI was 8.6% over the last 12 months.3 Further, the inflation rates have remained at persistently high levels, refuting the “transitory inflation” thesis widely touted last year. 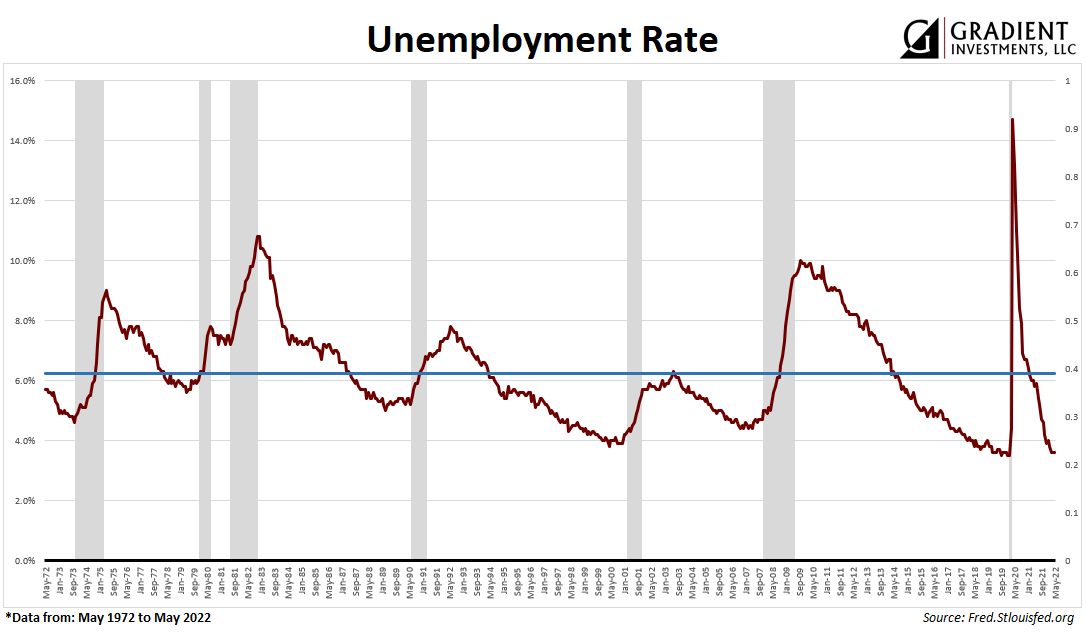 The Federal Open Market Committee (FOMC) is the branch of the Federal Reserve that makes Central Bank policy and consists of seven members and five Fed presidents. At the most recent FOMC meeting, the fed funds rate was raised by 0.75%, the largest increase since 1994. The current fed funds rate now ranges from 1.50-1.75%.4 As a reminder, the fed funds rate is the overnight interest rate used by banks for lending and can influence consumers through higher interest rates on things like mortgages, auto loans, and credit cards. The goal of raising the fed funds rate is to increase the cost of borrowing to levels that slow price growth (inflation) through slower spending levels. This action, while controlling inflation, also has the unfortunate side effect of slowing the economy.

In addition, the FOMC began to tighten monetary policy by using Quantitative Tightening (QT). Two ways in which the Fed can achieve this is by selling bonds or letting bonds mature to reduce the amount of assets on the Fed balance sheet. The primary goal of implementing these actions is to reduce the supply of money circulating in the economy. The FOMC announced their decision to allow for $47.5 billion to mature off the balance sheet starting in June and increase to $95 billion in September.5 The chart below shows the current level of assets on the Fed’s balance sheet, roughly $9 trillion, are starting the decline.1

The Fed’s recent actions have been a clear signal to the markets that they are no longer supporting the economy (“easing”) and are now focused solely on controlling inflation (“tightening”). The primary concern with this change is the risk that the Federal Reserve, in an effort to curb prices, actually causes economic growth to slow meaningfully or fall into recession. As a result of this, and other circumstances like oil and food supply issues, market volatility has increased substantially and both stocks and bonds have experienced a significant correction.

Get Your Risk Score

The Color of Money Risk Analysis assesses your financial picture and provides a roadmap to your overall risk preferences. The output will be a proprietary Color of Money score. This short, interactive analysis is the first step on the road to retirement.

The official U.S. Government Site for Medicare. Complete a general or personalized plan search for a cost estimates and coverage information. Login here

Let's connect to see how we can help you!